Arsenal striker Pierre-Emerick Aubameyamg was devastated after the Gunners crashed out of the Europa League against Olympiacos.

The Gabon international thought he’d won the tie for the London side after a sensational bicycle kick deep into stoppage time.

However a characteristic defensive lapse allowed the Greek team to score in the 119th minute, and they won on away goals.

The Gabon striker missed a gilt-edged chance to seal the tie, and that, plus the cruel nature of the defeat weighed on him after the game.

“Very, very disappointing. What can I say? It is very, very hard. It was a tough game again,” the club captain told BT Sport.

“The last-minute goal was, yeah, unlucky for us. That is it.

“I don’t even know [how I missed that chance late on]. I feel very, very bad. It can happen but I do not know how I missed this chance. I was tired, I had some cramps but it is not an excuse.”

“It was tough because they played very deep. It was hard to find the solutions in the final third. It was a really tough game and tough to find spaces.” 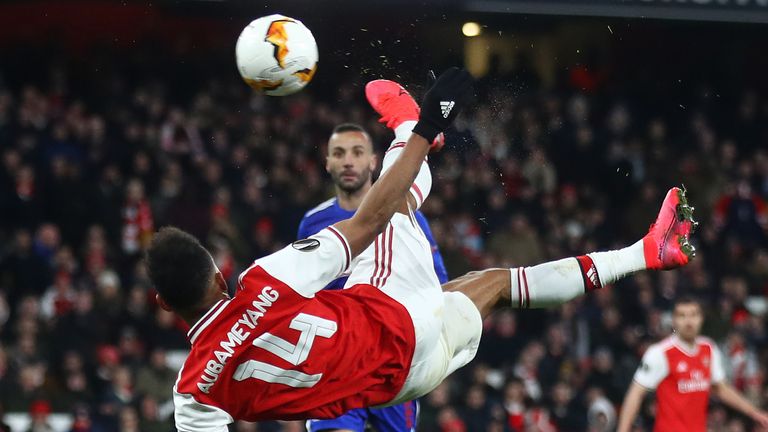 Although a fifth place finish in the Premier League may see a team qualify for Europe’s elite competition Arsenal are currently in ninth, four points behind Manchester United in fifth.

Should Manchester City’s appeal against their two year suspension from playing in continental tournaments be upheld Arsenal would have a seven point gap to make up to Chelsea in fourth.

Aubameyang knows that the odds are against them, but thinks if they can play well, they are in with a shot.

“We will try to keep improving in the league and try to win as many games as possible and we will see,” he concluded.

Arsenal are not in action this weekend in the Premier League, but have an FA Cup tie against Portsmouth on Monday, before playing West Ham on March 7.